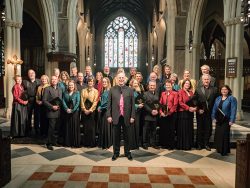 One of Europe’s most prominent chamber choirs, the Joyful Company of Singers is known for its virtuosity and intensity of spirit, as well as for an astoundingly wide repertoire, ranging from the 16th Century to the present day, including many first performances.

Formed in 1988, by conductor Peter Broadbent MBE, the choir first came to prominence when it won the Sainsbury’s Choir of the Year competition in 1990. Since then it has maintained its profile in the music world, winning an impressive list of national and international competitions leading to many invitations.

Concert performances include most of the leading UK festivals and regular concert tours in Europe, broadcasting in many countries as well as on BBC and Classic FM.
A discography of over 25 CDs includes the Rachmaninov All-night Vigil on Nimbus – “beautifully characterized and shaped by Peter Broadbent” (International Record Review). 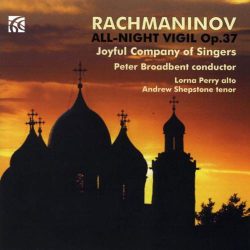 In the past decade the JCS instituted a Youth Fund to encourage the development of young conductors and composers. A composition competition in 2014 was won by young Australian composer Chris Williams, and in 2016 the JCS along with the Bristol choir ‘Exultate’ and the Strathclyde University Chamber Choir commissioned a major work from Toby Young. Our provision of a Junior Fellowship has previously enabled four young conductors to work with the choir:  Christopher Hann, Helen Smee, Patrick Barrett and Louisa Denby, and we have now welcomed Olivia Tait to this role.

The Joyful Company of Singers is a registered charity (reg. no. 1057257) and is managed by a Board of Trustees that can comprise both singers and non-singers with a wide variety of professional backgrounds. 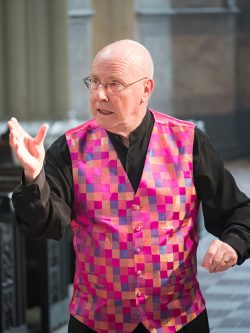 Peter Broadbent MBE is the founder conductor of Joyful Company of Singers and one of Britain’s leading choral conductors. He has conducted the London Mozart Players, Divertimenti Chamber Orchestra, the English Chamber Orchestra, the City of London Sinfonia, the Royal Philharmonic Orchestra, the Southern Sinfonia, the Guildford Philharmonic Orchestra, Apollo Voices and the BBC Singers, broadcasting frequently on BBC Radio 3 and Classic FM. Engagements outside the UK include concerts with the Debrecen Philharmonic Orchestra & Kodály Chorus in Hungary, a broadcast with the National Chamber Choir in Dublin and a European tour with the World Youth Choir in 2006. He gives workshops and master classes throughout Europe, and was the first Director of Training for the Association of British Choral Directors. In 2007 he was presented with the Pro Cultura Hungarica Award by the Hungarian Ministry of Culture for his services to Anglo-Hungarian musical relations, and in early 2016 was presented with the Knight’s Cross of the Hungarian Order of Merit.

Peter Broadbent was awarded his MBE (Member of the Order of the British Empire) in the New Year’s Honours List 2022 for services to music.

We use cookies on our website to give you the most relevant experience by remembering your preferences and repeat visits. By clicking “Accept All”, you consent to the use of ALL the cookies. However, you may visit "Cookie Settings" to provide a controlled consent.
Cookie SettingsAccept All
Manage consent

This website uses cookies to improve your experience while you navigate through the website. Out of these, the cookies that are categorized as necessary are stored on your browser as they are essential for the working of basic functionalities of the website. We also use third-party cookies that help us analyze and understand how you use this website. These cookies will be stored in your browser only with your consent. You also have the option to opt-out of these cookies. But opting out of some of these cookies may affect your browsing experience.
Necessary Always Enabled
Necessary cookies are absolutely essential for the website to function properly. These cookies ensure basic functionalities and security features of the website, anonymously.
Functional
Functional cookies help to perform certain functionalities like sharing the content of the website on social media platforms, collect feedbacks, and other third-party features.
Performance
Performance cookies are used to understand and analyze the key performance indexes of the website which helps in delivering a better user experience for the visitors.
Analytics
Analytical cookies are used to understand how visitors interact with the website. These cookies help provide information on metrics the number of visitors, bounce rate, traffic source, etc.
Advertisement
Advertisement cookies are used to provide visitors with relevant ads and marketing campaigns. These cookies track visitors across websites and collect information to provide customized ads.
Others
Other uncategorized cookies are those that are being analyzed and have not been classified into a category as yet.
SAVE & ACCEPT